To Be Set Free 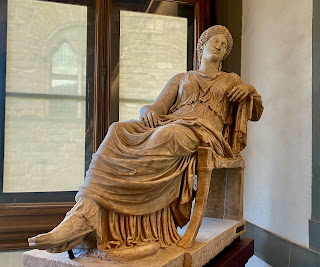 A woman of the imperial household in Rome. Scripture: Rom. 6:15   What then? Should we sin because we are not under law but under grace? By no means! 16 Do you not know that if you present yourselves to anyone as obedient slaves, you are slaves of the one whom you obey, either of sin, which leads to death, or of obedience, which leads to righteousness? 17 But thanks be to God that you, having once been slaves of sin, have become obedient from the heart to the form of teaching to which you were entrusted, 18 and that you, having been set free from sin, have become slaves of righteousness. 19 I am speaking in human terms because of your natural limitations. For just as you once presented your members as slaves to impurity and to greater and greater iniquity, so now present your members as slaves to righteousness for sanctification. Rom. 6:20   When you were slaves of sin, you were free in regard to righteousness. 21 So what advantage did you then get from the things of which
Post a Comment
Read more

The Power of Grace 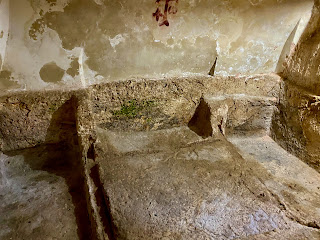 The tomb is empty, for He has risen -- at the Garden Tomb, Jerusalem.  Scripture: Rom. 6:1   What then are we to say? Should we continue in sin in order that grace may abound? 2 By no means! How can we who died to sin go on living in it? 3 Do you not know that all of us who have been baptized into Christ Jesus were baptized into his death? 4 Therefore we have been buried with him by baptism into death, so that, just as Christ was raised from the dead by the glory of the Father, so we too might walk in newness of life. Rom. 6:5   For if we have been united with him in a death like his, we will certainly be united with him in a resurrection like his. 6 We know that our old self was crucified with him so that the body of sin might be destroyed, and we might no longer be enslaved to sin. 7 For whoever has died is freed from sin. 8 But if we have died with Christ, we believe that we will also live with him. 9 We know that Christ, being raised from the dead, will never die agai
Post a Comment
Read more 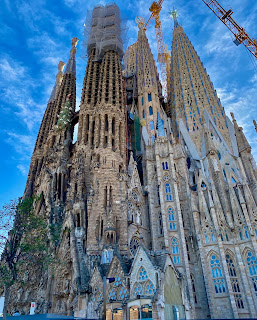 la Sagrada Familia in Barcelona Scripture: Rom. 5:12   Therefore, just as sin came into the world through one man, and death came through sin, and so death spread to all because all have sinned— 13 sin was indeed in the world before the law, but sin is not reckoned when there is no law. 14 Yet death exercised dominion from Adam to Moses, even over those whose sins were not like the transgression of Adam, who is a type of the one who was to come. Rom. 5:15   But the free gift is not like the trespass. For if the many died through the one man’s trespass, much more surely have the grace of God and the free gift in the grace of the one man, Jesus Christ, abounded for the many. 16 And the free gift is not like the effect of the one man’s sin. For the judgment following one trespass brought condemnation, but the free gift following many trespasses brings justification. 17 If, because of the one man’s trespass, death exercised dominion through that one, much more surely will those
Post a Comment
Read more 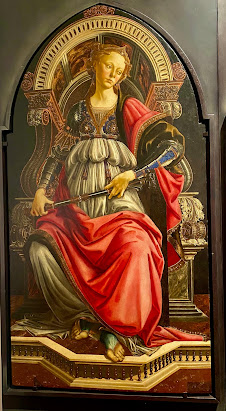 Virtue of Fortitude by Botticelli                                                                Scripture: Rom. 5:1   Therefore, since we are justified by faith, we have peace with God through our Lord Jesus Christ, 2 through whom we have obtained access to this grace in which we stand; and we boast in our hope of sharing the glory of God. 3 And not only that, but we also boast in our sufferings, knowing that suffering produces endurance, 4 and endurance produces character, and character produces hope, 5 and hope does not disappoint us, because God’s love has been poured into our hearts through the Holy Spirit that has been given to us. Rom. 5:6   For while we were still weak, at the right time Christ died for the ungodly. 7 Indeed, rarely will anyone die for a righteous person—though perhaps for a good person someone might actually dare to die. 8 But God proves his love for us in that while we still were sinners Christ died for us. 9 Much more surely then, now that we
Post a Comment
Read more 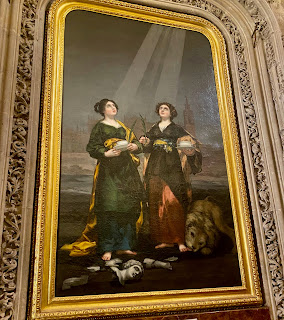 Female martyrs, hoping against hope.  Scripture: Rom. 4:13   For the promise that he would inherit the world did not come to Abraham or to his descendants through the law but through the righteousness of faith. 14 If it is the adherents of the law who are to be the heirs, faith is null and the promise is void. 15 For the law brings wrath; but where there is no law, neither is there violation. Rom. 4:16   For this reason it depends on faith, in order that the promise may rest on grace and be guaranteed to all his descendants, not only to the adherents of the law but also to those who share the faith of Abraham (for he is the father of all of us, 17 as it is written, “I have made you the father of many nations”)—in the presence of the God in whom he believed, who gives life to the dead and calls into existence the things that do not exist. 18 Hoping against hope, he believed that he would become “the father of many nations,” according to what was said, “So numerous shall your
1 comment
Read more 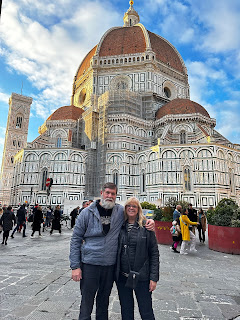 The Duomo in Florence.  Scripture: Rom. 4:9   Is this blessedness, then, pronounced only on the circumcised, or also on the uncircumcised? We say, “Faith was reckoned to Abraham as righteousness.” 10 How then was it reckoned to him? Was it before or after he had been circumcised? It was not after, but before he was circumcised. 11 He received the sign of circumcision as a seal of the righteousness that he had by faith while he was still uncircumcised. The purpose was to make him the ancestor of all who believe without being circumcised and who thus have righteousness reckoned to them, 12 and likewise the ancestor of the circumcised who are not only circumcised but who also follow the example of the faith that our ancestor Abraham had before he was circumcised. Observation: The Jews were intent upon the sign of circumcision as proof that they were made righteous before God. This, of course, distinguished them from the Gentiles who were not circumcised. In the diatribe style
2 comments
Read more 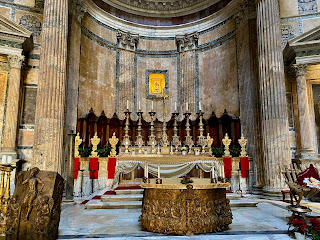 Altar in the rotunda of the Pantheon, Rome.  Scripture: Rom. 4:1     What then are we to say was gained by Abraham, our ancestor according to the flesh? 2 For if Abraham was justified by works, he has something to boast about, but not before God. 3 For what does the scripture say? “Abraham believed God, and it was reckoned to him as righteousness.” 4 Now to one who works, wages are not reckoned as a gift but as something due. 5 But to one who without works trusts him who justifies the ungodly, such faith is reckoned as righteousness. 6 So also David speaks of the blessedness of those to whom God reckons righteousness apart from works: 7 “Blessed are those whose iniquities are forgiven, and whose sins are covered; 8 blessed is the one against whom the Lord will not reckon sin.” Observation: Paul realized that there were still people who were unconvinced by his argument of faith vs. works. The Jews considered Abraham an incredible example of one who lived out his
Post a Comment
Read more
More posts