Lev. 26:23 ¶ If in spite of these punishments you have not turned back to me, but continue hostile to me,
Lev. 26:24 then I too will continue hostile to you: I myself will strike you sevenfold for your sins.
Lev. 26:25 I will bring the sword against you, executing vengeance for the covenant; and if you withdraw within your cities, I will send pestilence among you, and you shall be delivered into enemy hands.
Lev. 26:26 When I break your staff of bread, ten women shall bake your bread in a single oven, and they shall dole out your bread by weight; and though you eat, you shall not be satisfied.

God wants his people to be in a right relationship with him.  All that he desires is for their good and yet he knows their hearts and that they are constantly tempted to drift away and not to serve him.  He begins discussing the consequences of their unfaithfulness.  A number of items are listed but the final one comes down to bread.  There is great significance in this for God is their provider of bread.  Every morning all they have to do is look on the ground and collect what they need for that day.  When these people are obedient to God they will have absolutely everything that they need provided for them on a daily basis!  The punishment for disobedience is not so much a punishment as it is a consequence.  On a normal day among the Israelites the women would gather the manna and then they could cook it and prepare it in a number of different ways, including baking it.  When there is plenty of food one needs many ovens for a community.  A single oven would never work for there would be an incredible backlog of people trying to get their bread baked.  Instead many homes would have their own oven and the woman of the house would be able to bake as much as they needed.

The consequence of disobedience would be a lack of daily sustenance.  No longer would there be bread to be gathered freely from the ground but instead they would have to work for their grain.  The grain would not be easy to gather in because of the difficulties in growing the crop.  What little they were able to harvest would barely sustain them on a daily basis.  No longer would every home need their own oven but one would suffice for ten households.  So little bread would be produced that they would have to weigh it out on scales, not even an entire loaf per family.  A small amount could be eaten, but their stomachs would soon growl from hunger.

This would simply be a daily reminder of disobedience.  God who wants to provide us with everything that we need is heart broken when we go hungry.  We are the ones who become stingy in our spiritual lives and want to carefully measure out everything.  We want to make sure we only give our tenth (or less) to God -- so we measure it out to the exact penny!  We wouldn't want to be too generous.  We become concerned when church begins to take up too much of our lives -- we measure out that time, making sure we still have enough for ourselves and the things that we want to do!  And little by little as we begin scrutinizing the things of God we fail to realize that we re the ones cutting ourselves off from the daily supply of nourishment.

During the Great Patriotic War against the Fascists (WWII) the city of Leningrad (currently St. Petersburg) was under siege, or blockade by the German forces for 872 days.  For two and a half years the city was pounded day in and day out by German artillery and the people had to figure out how to survive.  Soon the food began to run out and the entire city was placed under rations.  Eventually it got to the point where every person was allowed 150gm of black bread a day.  If you were a factory worker you were allowed 250gm.  That's it.  This became known as a "Leningrad portion." 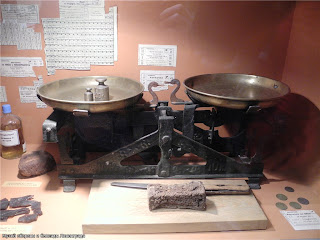 There was no more to be had and if you were going to survive, you had to figure out how to ration this small portion of food so that you could survive.  For this small portion of food there was no need for an oven or a stove at home.  There really was nothing to cook.  No one would receive an entire loaf of bread -- instead, the piece was weighed on the scales -- in accordance with your daily allowance.  And their stomachs were empty and growling from hunger.

No one in their right mind would want to try to survive on a Leningrad portion.  Today the phrase "a Leningrad Portion" is used when you are given something extremely small and it seems a bit ridiculous.  But how many of us are trying to survive spiritually on a "Leningrad Portion?"  God is trying to provide us with everything that we need on a daily basis to survive -- and not just to survive, but to thrive spiritually.  He wants our houses to be full -- he wants us to have to have our own oven in which to bake the bread of his goodness.  Yet, we could just as easily be like the Israelites who did turn their backs on the Lord.  The manna no longer fell and the fields did not always produce the necessary crops.  Why?  Because they couldn't follow the very first law of God -- "Hear Oh Israel, the Lord your God, the Lord is one!"  They gave the living God a "Leningrad Portion" of their faith, sharing their faith and devotion with other gods.  In return they lost the daily sustenance and protection that they so desperately needed and they purposely existed on a "Leningrad portion" when they could have had so much more.

Sadly, many of us are trying to get by on that "Leningrad Portion" spiritually and then we wonder why there are times that we stumble and fall.  God says to give him our all -- and he gives us everything we need in return.  He loves us -- he wants to care for us -- he wants to give us more than we could ever ask or imagine -- but we must live in obedience to him.  Let's give up that measly "Leningrad Portion" and sit down at the banquet table he has set before us.