My Friend the Refugee

- December 07, 2015
I can’t really remember where I was going that day, but I recall the bus was very crowded. Eventually I found a seat and the woman next to me was trying to ask me something. Her Russian wasn’t very good and mine wasn’t that much better. She wanted to make sure she knew when to get off and it would be in a few stops. The attempt at communication continued as she seemed a bit scared and confused by everything. I knew how she felt for so often there were times when Russia felt a bit frightening. I carried my documents with me at all times and from time to time was detained by the police for document checks, whether walking, or driving in the car. Luckily I was able to blend in with much of the population but not this woman on the bus. Her skin was just a little darker and her clothing gave her away — she was a foreigner. She wasn’t just any foreigner either, she was a refugee from Afghanistan, trying to get documentation to be able to move on. She, her husband and her children were only hoping for a better life, one far away from the war in her country of Afghanistan and her hometown of Kabul.

Before she got off the bus we exchanged phone numbers. Somehow, in those few minutes on the bus we had connected, foreigners in a foreign land, trying to live our lives. Me, a young mom with two little girls. She, a young mom with with a brood of little ones she was trying to raise in a place that was quite hostile to their presence. I was invited to come over some evening and get to meet the family.

It was a few weeks later when the girls and I made our way to the other side of town. Where the refugees lived could have been called a “ghetto.” The housing was gray and very Soviet — a Krushev building with five floors and no elevator. These were to be “temporary” buildings, torn down and replaced when the Soviet Union had reached the state of Utopia. It had never happened and now, these buildings were filled with people in need. We ventured up the dark stairwell until we arrived at the door. The foul odor of the stairwell was suddenly mixed with the scent of dinner cooking somewhere behind the door. It was an odd sensation of good and bad that erupted into a flavorful aroma when the door was opened and we were welcomed into the small one-room flat. We took off our shoes and we were ushered into the room which had a sheet spread across the floor. All of the families’ possessions had been pushed into the corners of the space and we were going to sit down for dinner. As we made our way to the floor my new friend began bringing out platters of food. The cut fresh vegetables were arranged on a tray. Steaming rice and chicken filled out the meal. We enjoyed an evening of food and fellowship, my girls trying to talk with my friend’s children and somehow all of them figuring out some way to communicate. It was a blessed evening of fellowship and warmth.

We kept in touch through the months. Life was hard. They couldn’t get the right documents because things were in limbo with Afghanistan and the USA and the European Union couldn’t figure out the status of these people. They couldn’t go home and no one would have them and so they continued their poor existence in a land that didn’t want them.

My friend got very sick and called for the doctor to come to her home. She needed an antibiotic but pills were too expensive so she was given an injection. It caused an abscess in her hip and she became even sicker. Finally she was sent to the hospital to do surgery on the abscess that had formed where she had gotten the injection. She wondered if I could come and check on her. My mother happened to be visiting and I told her we needed to go visit a friend in the hospital. We rode the subway and then the bus, arriving back in the ghetto. Two men smoking heavily and playing checkers controlled the door to the hospital. A little bribe was required for them to let us past the door and when our eyes finally adjusted to the darkness inside we were sent to the Coat Room. There stood a woman selling vodka, cigarettes and grocery shopping bags. I was informed we would each need to purchase two grocery bags, which we did and were then told to wear them over our feet, to keep the floors clean. The bags were tied around our ankles, then we made our way back out to the lobby in our new protective gear. The elevators were broken and my friend was on the 7th floor. My mom was in her mid-70’s but she trekked all the way up those stairs when we finally arrived to find the room where my friend was recovering. It was a ward with fourteen women and the restrooms hadn’t been cleaned in possibly months. She was so grateful that we had come. We talked and visited, laughed and shared together. Meeting my mom was a real joy for her.

She recovered and a few months later we were planning for Christmas events at the church. We would hold a Yulka for the children in the community. I invited my friend and her children and they happily came and attended. The children all got gifts and loved their evening visiting with Father Frost and the Snow Maiden, as well as hearing the Christmas story. Before she left that night my friend wanted to give me something as well. She knew it was my holiday. She had told her mother back in Kabul about me and my mother. Her mom bought a beautiful piece of fabric and sent it to Moscow. It was from Afghanistan — a place where women had to cover from head to toe. In Kabul women were being beaten for wearing anything considered revealing. This fabric would never have seen the light of day on a woman in Kabul, and yet she went out of her way to send it to me.

I was overwhelmed by the beauty of the piece of cloth and eventually had it sewn into a skirt. It is a beautiful reminder of a paradox. It’s from a woman who wasn’t allowed to enjoy its beauty and yet she wanted to share it with someone who could. That someone was me — a Christian — a foreigner in a foreign land. The gift was from my Muslim friend from Afghanistan — a foreigner in a foreign land. I believe that God allowed our paths to cross. 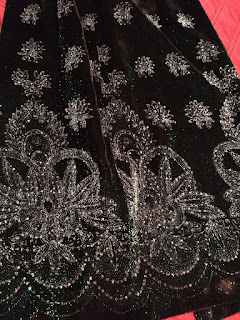 Soon after, we lost contact. I don’t know what happened to my friend but I know that for a number of months we had a connection that transcended where we were from, who we were, or where we were living. God doesn’t call us to be selective about those whom we may encounter on the roads of life but rather, to speak to those beside us. We are to love the alien among us and remember what it feels when we are one too!

This is Advent. As we anticipate the coming of our Messiah may we reach out in love to those who will cross our path. May we show the love of Jesus to the refugee, immigrant or person whose faith is different from ours. Remember, it’s better to give than to receive. Reach out — give the gift of Jesus’ love.