When We Leave the Marketplace 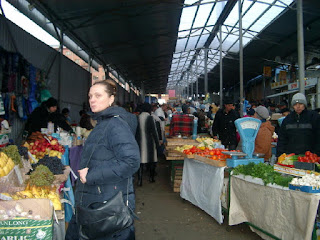 Now when the Pharisees and some of the scribes who had come from Jerusalem gathered around him, they noticed that some of his disciples were eating with defiled hands, that is, without washing them. (For the Pharisees, and all the Jews, do not eat unless they thoroughly wash their hands, thus observing the tradition of the elders; and they do not eat anything from the market unless they wash it; and there are also many other traditions that they observe, the washing of cups, pots, and bronze kettles.) So the Pharisees and the scribes asked him, “Why do your disciples not live according to the tradition of the elders, but eat with defiled hands?”
He said to them, “Isaiah prophesied rightly about you hypocrites, as it is written, ‘This people honors me with their lips, but their hearts are far from me;
in vain do they worship me, teaching human precepts as doctrines.’ You abandon the commandment of God and hold to human tradition.”
(Mark 7:1–8 NRSV)

Jesus and the disciples had been in the marketplace where they had encountered the sick and the needy. Once again Jesus revealed his power over that which the world would consider unclean.

As they left the marketplace the disciples did not follow the Pharisees practice of hand washing. Because of the ministry that had been done in the marketplace, the religious officials looked on and determined that, according to their tradition, these disciples were unclean. However, it seems that Jesus was trying to make the point that his holiness was much more powerful than any illness or disease found in this world.

The Pharisees were unable to comprehend that which Jesus was really doing in their midst and therefore they had to criticize him as he left the marketplace.

If we follow Jesus on mission we will find ourselves in the marketplace, touching and ministering to those whom the world would consider unclean. I began my working career as an RN where my favorite assignment was as a home-health nurse. Going into people’s homes, providing care and getting to share life with people was both challenging and a blessing.

There were times when I cared for people who were considered infectious and would need to glove and gown. Special attention was given to the disposal of all materials which had touched the individual and to my garb as I exited the space. Had everything been done properly, at the end of the day, I could go home and interact with my family without any fear of contaminating them. But what if they felt that they could not trust me, or whether I had followed the correct procedures? My family would have been left vulnerable and in terrible fear of my presence.

The religious leaders were upset with Jesus because they believed that he was bringing the contamination to them. The problem was that they didn’t trust in who Jesus was and failed to recognize that there was no contamination when he left the marketplace. His holiness left everything clean and pure, and therefore there was no need for the disciples to wash their hands because they were trusting entirely in Jesus and his holiness.

Our attitude regarding ministry in the marketplace will either come from a place of fear, or of trust. This isn’t about our traditions, but about our faith in Jesus Christ and recognizing him for who he is and the power he bestows.

Lord, may you help me to trust in you and your power more and more every day of my life. Amen.