When You’re Not Sure Where This is Going

Acts 9:32   Now as Peter went here and there among all the believers, he came down also to the saints living in Lydda. 33 There he found a man named Aeneas, who had been bedridden for eight years, for he was paralyzed. 34 Peter said to him, “Aeneas, Jesus Christ heals you; get up and make your bed!” And immediately he got up. 35 And all the residents of Lydda and Sharon saw him and turned to the Lord.

In this text by the physician Luke, Paul has just recently been converted. Suddenly the narrative shifts to the Apostle Peter who is, no doubt, the leader of the followers of the Way. This passage sets the stage for the expansion of the ministry to the Gentiles. It is in Joppa that Peter has his vision that eventually leads him to the house of Cornelius but at this moment, Peter has no idea where this is going. Peter is simply going about his business, visiting the believers who live outside of Jerusalem, making it to the town of Lydda.

It is in Lydda, not far from Joppa, that we encounter a man named Aeneas and doctor Luke wants to make sure that we understand that this is a very miraculous healing. There is almost a parallel here to Jesus’ healing of the lame man at the Beautiful gate of the temple. Jesus’ act in Jerusalem as well as Peter’s here in Lydda is a demonstration of the divine power which was to be found in Jesus Christ. Peter may not have known where the path was leading, but he did know that he would never take personal credit for what was happening. Jesus was always to be glorified in and through any miracles.

Just imagine that this was a spinal cord injury, something that humans still cannot heal! The entire community was well aware of this man’s condition because he was bedridden. His life would have been in the hands of others and so his healing would have a far-reaching effect. The command from Peter is clear, that it is Jesus Christ who is the healer. Instantly the man is healed, but there is more to be seen. In his healing, the man is to make his bed. No longer is he to lie in his bed and be cared for by others, but he is to take his up his bed and become a contributing member of the community of faith.

This healing is done very visibly before the community for it touches more than just Aeneas. All those who had given of their time and resources to care for this man were suddenly freed from that responsibility. Now, freed from their burdens as well, many turned to the Lord.

Like breadcrumbs on the pathway, Peter is simply following the leading of the Spirit, not knowing that this is opening the door to ministry to the Gentiles.

Accepting the fact that we don’t always know the answers or understand God’s viewpoint is important in our spiritual lives. We are to follow Christ obediently to the places where God would take us and not think that we know all the answers. Sometimes God is at work in this world in unusual ways and uses difficult circumstances to bring glory to Jesus.

This morning I’m sitting in a nice little apartment in Johannesburg, South Africa. It’s a far cry from where I’ve spent the weekend, in a little corner of Ethiopia, near the border with South Sudan. The war in Sudan has created hundreds of thousands of refugees, many of whom are living in camps in this region.

On a Sunday morning in Gambella there is no time to discuss the politics of the war-torn region, but simply the opportunity to look around and realize that we are not sure how we got here, but that God is in the midst. The yard of the church is filled with at least a hundred children, some of whom are orphans, having Sunday School and learning about Jesus. Their smiles are beautiful and we reach out to touch them in the name of Jesus. We aren’t sure where this is going, but we just follow the leading and the prompting of the Spirit. 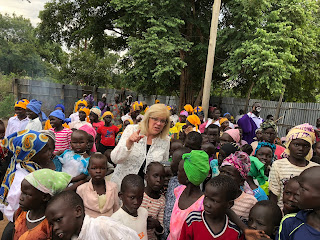 The Spirit of God has been at work in the refugee camps and in one camp alone I learn that we have seventeen churches. The last time a General Superintendent visited this region was eight years ago when Dr. Stan Toler came and had their first ordination service. That day one person was ordained and they rejoiced. Today they have set up pastoral education right in the refugee camps and this day I was to ordain twenty-four individuals as elders or deacons. Unfortunately because of road-blocks, two couldn’t make it. But, what is God up to that we would be ordaining individuals held in refugee camps? We are not sure where this is going, but God seems to be making a way.

As the day continues to warm, we enjoy the beauty of Christian worship and fellowship. Jesus is lifted up as the people sing and dance and praise the Lord. Our Regional Director, Rev. Daniel Gomis brings the word, sharing about the young exiles, Daniel and his three friends. How, when they were refugees they did everything they could to be faithful servants of God. The young people flocked to the front of the church to commit themselves to follow in the footsteps of the young exiles and faithfully follow Jesus, even as refugees in a foreign land. 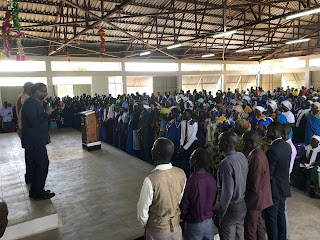 When it came time for the ordination I was overwhelmed. Where had God led me? To a hot and dry land filled with refugees, and there I saw Jesus. Jesus was in the face of every ordinand. It was the first time that women were ever ordained in the Horn of Africa, and we ordained sixteen women and six men. Where is God leading? What is God saying to the church?

Men and women, some with visible physical ailments, one with TB, covenanting to serve the Lord and the Church. Where is this leading? The joyful celebration that followed is like nothing I’ve ever seen before as they rejoiced in God’s hand upon their lives. 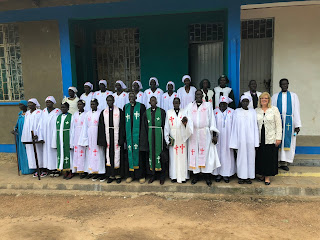 Be careful of questioning where God may be leading, even in the midst of difficult circumstances. We may just find Jesus is in the midst of something we don’t understand. Peter had no idea how the journey to Joppa would change his life and the future of the church. He lived on, in faith, following the nudging of the Holy Spirit every single day.

This weekend I encountered shining examples of Jesus in the people of South Sudan and Ethiopia. I wasn’t sure where I was going but I think I found heaven on earth.

Lord, I am grateful and humbled that you would allow me to experience what you are doing. Thank you. Amen.