What Really Happened in Ephesus? 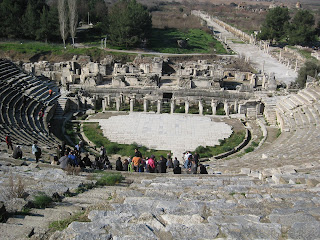 Acts 19:8   He entered the synagogue and for three months spoke out boldly, and argued persuasively about the kingdom of God. 9 When some stubbornly refused to believe and spoke evil of the Way before the congregation, he left them, taking the disciples with him, and argued daily in the lecture hall of Tyrannus. 10 This continued for two years, so that all the residents of Asia, both Jews and Greeks, heard the word of the Lord.

What we see here is a common pattern for Paul and his missionary activity. He would first enter a city and begin his ministry by preaching at the synagogue. Maybe he anticipated the opposition to his preaching that he faced at the synagogue. Eventually he would need to move to another location for a broader audience.

It’s suspected that Paul could have given his early morning hours to his work as a tent-maker. Then, more than likely, he used the lecture hall when it was available during the middle of the day, when lecturers broke for lunch and rest. Therefore, he taught from 11am until 4pm. Presumably, he returned to his tent-making or to visiting with people in their homes after completing the hours in the lecture hall.

Paul’s technique is quite successful. Because he teaches in a public place, many people in this cosmopolitan center hear the gospel. Eventually the good news spreads throughout the entire province.

My first inclination is to read this passage through the lens of church planting, or missionary work. There is so much to learn from Paul and from the way in which he intentionally worked to reach people for Christ. Interestingly, while reading the impressions of the early church fathers to this text, they don’t even comment on Paul’s technique. Maybe it was just such a common way in which to do ministry that they were not surprised, nor did they think they needed to comment on the way in which Paul did his work. If that’s true, then the fact that we dissect his activity and try to create models from it may say more about where we are and what we are doing in ministry, than about Paul.

What the early church fathers do comment on is the way in which this passage shows how Paul confronted evil. What really happened in Ephesus was opposition to the gospel. This was not done in a subtle manner, but this was an open push against the good news that Paul had come to share. By digging into their own perspectives and negativity they literally made fun of the Christians. They would come to the services and publicly malign those who were followers of the Way.

Instead of allowing this opposition to defeat him, Paul chose to move to another location. He knew that he was called to preach the gospel, and preach he would! If those who opposed him made it impossible to fulfill his mission, he found another way to continue on in his ministry. The door closed at the synagogue in Ephesus but God opened a door at the lecture hall of Tyrannus. It wasn’t a strategy, but it was a man, following Christ in his mission and ministry. The door of opportunity swung open because Paul refused to succumb to the negativity of those who opposed him.

Lord, may I follow Paul with great tenacity into your mission.  Amen.