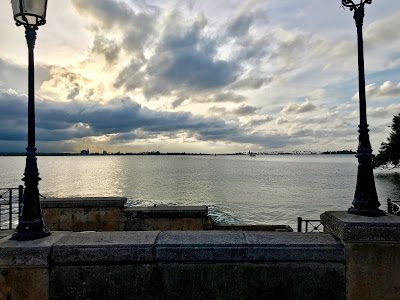 Mark 6:1   He left that place and came to his hometown, and his disciples followed him. 2 On the sabbath he began to teach in the synagogue, and many who heard him were astounded. They said, “Where did this man get all this? What is this wisdom that has been given to him? What deeds of power are being done by his hands! 3 Is not this the carpenter, the son of Mary and brother of James and Joses and Judas and Simon, and are not his sisters here with us?” And they took offense at him. 4 Then Jesus said to them, “Prophets are not without honor, except in their hometown, and among their own kin, and in their own house.” 5 And he could do no deed of power there, except that he laid his hands on a few sick people and cured them. 6 And he was amazed at their unbelief.

The pinnacle of Jesus’ power had been revealed by raising the little girl to life. Word of his power had spread throughout the entire region where he lived and traveled. On this sabbath he chose to go to his hometown, which most assume is Nazareth. The response of the people was filled with emotion. A small community of 150-200 people, Jesus was well-known. These people had all been a part of raising him and they found the stories about him very hard to believe.

Instead of faith in him as a great teacher and leader, this crowd was skeptical. Mumbling under their breath they recited the names of his family members as a subtle reminder that he was the son of a single mother — a widow — and had no place of authority in the community.

In the previous miracle scene two individuals had come to Jesus with great faith — both Jairus, and the woman with the issue of blood. Their faith, combined with the power of God in Christ Jesus, resulted in miracles that have stood the test of time. The people of Nazareth have no faith but want Jesus to perform for them, as if he were some kind of carnival actor. Signs alone will not produce faith, and Jesus knew this far too well.

Stunningly, Jesus is the one who is amazed. The unbelief of the people of Nazareth was so great that he could do nothing in their presence. The power of the Almighty God was thwarted through their unbelief. Power — Limited.

The good news is that while Jesus sows these seeds on rocky soil, faith ultimately grows. Following Jesus’ resurrection, Jesus’ family is present and they participate in the life of the new church, post-pentecost. God’s direction and purpose for humanity cannot be thwarted by those who refuse to believe.

When the local church becomes like Nazareth, we run the risk of living with limited power. Familiarity with Christ and religious practices can lull us to sleep. Our Sunday morning prayers can turn into requests for Jesus to perform. Sadly, it may be Jesus who looks upon us and wonders at our unbelief. The routine of the worship sequence, filled with lights and smoke machines may leave us numb to the fact that we have missed out on meeting with the true Jesus. When we attend a simple service without all the bells and whistles we may be tempted to think — “isn’t that just the local Carpenter?”

Together with the people of Nazareth we may be so scandalized by his failure to meet our expectations that Jesus becomes  amazed at our unbelief. We settle for a powerless Christian life because we refuse to see Jesus for who he really is.

Lord, I don’t want to live in a place where there is now power because of my unbelief. Increase my faith as I trust in you every day. Amen.