Have you Had a Bath?

2Chr. 4:2 Then he made the molten sea; it was round, ten cubits from rim to rim, and five cubits high. A line of thirty cubits would encircle it completely.
2Chr. 4:3 Under it were panels all around, each of ten cubits, surrounding the sea; there were two rows of panels, cast when it was cast.
2Chr. 4:4 It stood on twelve oxen, three facing north, three facing west, three facing south, and three facing east; the sea was set on them. The hindquarters of each were toward the inside.
2Chr. 4:5 Its thickness was a handbreadth; its rim was made like the rim of a cup, like the flower of a lily; it held three thousand baths.
2Chr. 4:6 He also made ten basins in which to wash, and set five on the right side, and five on the left. In these they were to rinse what was used for the burnt offering. The sea was for the priests to wash in.

Solomon's temple is taking form and the furniture is being made.  One of the items for the temple is the molten sea.  This is to be a large bronze container that will hold 3000 baths of water, the equivalent of 18,000 gallons or 66,000 liters of water.  There are those who believe that the panels of the sea included depictions of the ten commandments.  Therefore we see the symbolism for the priests were to wash themselves in this sea, representing the cleansing through the law of God, and then be able to offer sacrifices on behalf of the people.

Just a few years ago while in modern-day Turkey I was walking through the ruins of an ancient church.  There in what would have been a holy back room was a very large basin let up on a pedestal.  While reading the scripture today I could see this large basin in my mind.  It would not have been as large as this sea and yet it was quite significant in size.  This basin I had seen in Ephesus and was used for baptism. Could there be a significant connection between the sea and the baptismal basin? 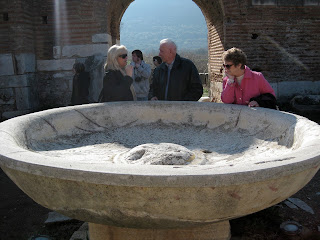 The sea was created for the use of the priests alone.  They were the only ones who could be purified by the cleansing of this water and go into the very presence of God, placing sacrifices before him.  It is believed that the sea itself was a container for the water, but that the water came out of the sea as a type of fountain which provided for the cleansing.  Only after having been cleansed could the priests move forward with their responsibilities.  The water sprang forth from a sea which contained the ten commandments on the sides; a reminder that the cleansing of the priests also came with obedience to the law of God.

That sea no longer exists, and neither does Solomon's temple.  Jesus had said that the temple would be destroyed but that he would raise it up again in three days.  We all know that he was referring to himself and that he is now the living temple!  No longer does a priest have to make sacrifices for us, but now we are invited into the "priesthood of all believers."  We don't need an intermediary because we may have a personal relationship with Christ and go direction to him and he intercedes for us with the Father.

If we are all priests, then it would make sense that we are all invited into this symbolic cleansing.  The sea is replaced with the baptismal font and instead of the priest being cleansed, we are the ones who are made clean, and instead of the ten commandments being written on the walls of the sea, they are written on our hearts.  This is the sign of the new covenant.  The old has passed away and all things are made new.  And we are not cleansed by the water, but we are cleansed by stepping into the fountain of the Holy Spirit who washes away all the filth of our lives and leaves us clean in the presence of God.

It is not a select called group of individuals who are called to bathe themselves and to be in God's presence.  We are all called to be bathed in the Holy Spirit and to be cleansed so that we can be in God's presence today.  We celebrate this through the sacrament of baptism.  The temple is gone, the new has come.  Sadly, some of us are still trying to make our way to God through the old system.  We are trying to follow the legalism of the past without wanting to step into the bath ourselves.  Somehow it seems easier if we don't have to get wet ourselves -- let someone else do it for us!  But Jesus has called us to jump into the deep end -- to be so filled with his holy presence that we are bathed in him day in and day out.

And the result of this soaking, or this standing in the fountain on a regular basis is an overflowing love for God and love for others.  Today we are overwhelmed at the loss and devastation in Moore, OK.  There are parents who are crying out in pain because their children never made it home from school.  There are children weeping over the loss of a parent.  Many are in shock as they look around and discover all that they had owned is now gone.  It is time for the people of God -- those who have been through the bath -- to splash some Jesus around.  What would Jesus do in the midst of this tragedy?  He would be -- and IS -- right in the middle of it all.  And we as God's people are called to go where he is.  We must help, we must respond, we must be Jesus in the midst of tragedy.  This is what those who have been through the bath do!  Their lives genuinely reflect a change.  They become living panels of the ten commandments and the world sees Jesus in them.

Her is a practical way in which we can all become involved today:

Have you had your bath?

Lord, please help those who are hurting so desperately today.  Our hearts break for them.  Please, help us to respond with your heart.    Amen.