The Need for Role Models

Phil. 3:17   Brothers and sisters, join in imitating me, and observe those who live according to the example you have in us. 18 For many live as enemies of the cross of Christ; I have often told you of them, and now I tell you even with tears. 19 Their end is destruction; their god is the belly; and their glory is in their shame; their minds are set on earthly things. 20 But our citizenship is in heaven, and it is from there that we are expecting a Savior, the Lord Jesus Christ. 21 He will transform the body of our humiliation that it may be conformed to the body of his glory, by the power that also enables him to make all things subject to himself.

Considering the fact that there was no New Testament at the time and that Paul’s letters were the nearest thing toward a Christian scripture, it’s no wonder that he felt that he had to be a role model for these believers. The people of Philippi were encouraged to look around and find those who could serve as examples for the way in which they were to live.

In contrast, there were people who served as examples to avoid. These were the ones who were living as enemies to the cross. Sadly, the way in which they lived broke Paul’s heart because he wanted them to experience something much better. Unfortunately they were drawn to the things of the world and to satisfying the desires of the flesh. All of this overwhelmed them and their lives and became far more important than knowing Christ.

The gentle reminder was to remember that our citizenship is now in heaven. Christ, the Messiah, will take the pain that we may now be suffering in the flesh and transform it by his power and for his glory.

Paul realized that his life was a living testament to the work of Jesus Christ in his life. He knew that many other people were counting on him and he took it all very seriously. Therefore, he submitted his life to the authority of Christ every single day and kept pressing on toward the goal.

While we do have the entire Bible at our disposal, I don’t think that its presence rules out the need for spiritual role models for our lives. I’ve heard a number of people say that pastors and religious leaders are “simply human” and don’t need to be held to a higher standard, and yet, I can’t imagine Paul having thought that way. He realized that what he did in life had an impact on the lives of others. What religious leaders do in their daily and private lives has a direct impact on the spiritual lives of others who are watching! No matter how hard one might try to excuse the life of a minister as “ordinary” there are far too many people who are watching and hoping that there will be those who model the way.

Spiritual role models are necessary and they don’t have to just be spiritual leaders in vocational ministry. Probably the greatest spiritual role models throughout history have been mothers. Children have their eyes on their parents, watching their every move and wondering what that means for their lives. My mother was my spiritual role model. From her I learned to have devotions and to pray, and to reach out and love neighbors. She cared for the woman next door who was dying. My mother made food for the new neighbors who moved in next door. After another family lost their child, it was my mother who was there ministering to them and their needs. We didn’t talk about the things that she did — I just watched it all with eyes wide open!

Yesterday morning I was holding my granddaughter at church and something was mentioned about baptism. The previous Sunday (Easter), her father had been baptized. He had given his life to Christ as a little child, but he had a deathly fear of going under the water and so had avoided baptism. My daughter and so-in-law have chosen to have their children baptized as infants and every night before they go to bed, they bless the girls and ask them if they will live into their baptism. A couple of months ago Mackenzie, two and a half years of age, asked her dad, “Do you live into your baptism?” He decided then that he needed to be baptized! So, yesterday morning Mackenzie began telling me about her daddy’s baptism in great detail. “He wore white and held his nose like this (and she grabs her nose and wrist).” “Mommy helped him and he came out of the water.” I was amazed at all that she remembered from the previous week. Little eyes, watching and studying every move are looking for role models. 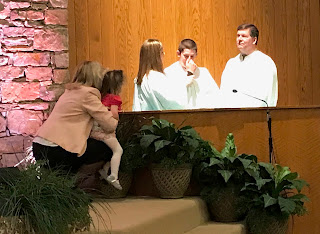 Just because we are getting older doesn’t mean that we don’t need role models. I’m constantly glancing the horizon for those who are role models and leading the way for all of us. I want to follow after them, as they follow after Christ. Then, there’s the wonderful moment when you find someone similar to yourself to follow and that provides additional energy.

We must all serve as role models, and find models to be followed. I believe that it’s part of God’s plan for the community of faith. Maybe this is why intergenerational worship is such a great need in the life of the church. We really do need each other — and every generation — and every gender — and every race — because somewhere there, we will continue to press on toward Christ, at the encouragement of others.

Lord, thank you for the amazing men and women whom you’ve placed into my life to become role models for me. Please help me to be a good model as well.  Amen.