1Sam. 19:11   Saul sent messengers to David’s house to keep watch over him, planning to kill him in the morning. David’s wife Michal told him, “If you do not save your life tonight, tomorrow you will be killed.” 12 So Michal let David down through the window; he fled away and escaped. 13 Michal took an idol and laid it on the bed; she put a net of goats’ hair on its head, and covered it with the clothes. 14 When Saul sent messengers to take David, she said, “He is sick.” 15 Then Saul sent the messengers to see David for themselves. He said, “Bring him up to me in the bed, that I may kill him.” 16 When the messengers came in, the idol was in the bed, with the covering of goats’ hair on its head. 17 Saul said to Michal, “Why have you deceived me like this, and let my enemy go, so that he has escaped?” Michal answered Saul, “He said to me, ‘Let me go; why should I kill you?’”

There are a lot of shady characters in this story. I’m not convinced that David is living out the best of his calling, but his wife Michal is put in a very difficult situation. She loved her husband, but she also had respect for her father. She knew that her father was terribly jealous of David and she had overheard his plans to have David killed. She let her husband in on the secret and she helped him to escape.

Now, the plot begins to thicken because we don’t know why there was an idol in the house. We never have record that David worshipped any idols, but obviously there is something that Michal grabs and then she intentionally deceives her father’s men. Finally, when she has been discovered by her father, she blames everything on David, claiming that he threatened to kill her. In the long run, this did not help Saul’s opinion of David. 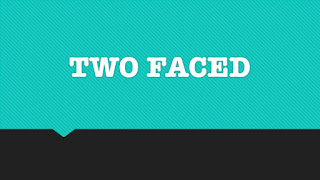 One wonders whether Michal needed to intervene in the way in which she did, or whether she could have trusted in the Lord? Surely she could have just said that her husband wasn’t home, or that he chose to leave, rather than come up with an elaborate scheme of deception of her father, and then a lie to cover for herself. The end result is that she threw in her lot with her father because, by declaring that David had threatened to kill her, she sealed her fate in regard to her relationship with her husband. Later on her father gives her away to another man and she ends up despising David.

There are some commentators who see in Michal our own response to Christ. Somehow, instead of embracing the truth of Christ, we keep trying to cover for ourselves. Sometimes we act like we really care about Christ and serving him, while at the same time trying to make ourselves look good in the eyes of the world. The problem is that we can’t have it both ways. Either we cleave to truth and holiness with every part of our being, or we cover for ourselves, trying to keep peace with the world. The result is that we may just lose God’s protection.

Lord, each and every day, may I trust in you. Amen.