The Danger of Feeding Power 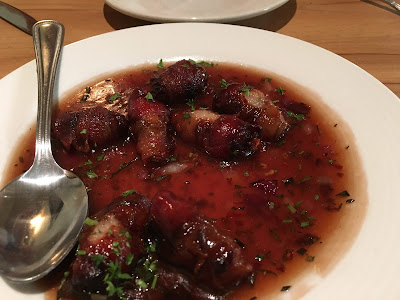 Now Herod was angry with the people of Tyre and Sidon. So they came to him in a body; and after winning over Blastus, the king’s chamberlain, they asked for a reconciliation, because their country depended on the king’s country for food. On an appointed day Herod put on his royal robes, took his seat on the platform, and delivered a public address to them. The people kept shouting, “The voice of a god, and not of a mortal!” And immediately, because he had not given the glory to God, an angel of the Lord struck him down, and he was eaten by worms and died.

This section begins right after Peter is miraculously freed from prison. Herod is unable to accept that Peter was freed by divine intervention and therefore blames the Roman guards, putting them to death. It all reveals his bloated self-image, and an unwillingness to humble himself before God.

The next scene to unfold is one in which the leaders of the cities of Tyre and Sidon approach him for help. Much of the area of the Mediterranean had been suffering from famine. The cities were dependent upon the goodwill of their leaders for grain supplies. Evidently Herod had been withholding necessary food from these people. Desperate to help out the situation they try to find a way to gain access to him. The king’s chamberlain, Blastus, may have been bribed, as a way to have a voice with Herod.

Because the king thought so highly of himself, the people had to pay their way to get close to him. Then, they began to plead for reconciliation. We aren’t told what had caused the problem in the first place, but one could imagine that it had something to do with Herod’s ego.

Having gained an audience with Herod, he was sure to put on a good show. Again, he wanted to press his power, therefore he wore his royal robes, and sat above the people on his throne. His ego, well-fed by the people begging for food and reconciliation, led him to deliver a public address.

We don’t know whether his speech was outstanding and that was the cause of the jubilant response, or whether the response was in an effort to garner his favor. I would suspect it had something to do with the latter because these were desperate people, willing to manipulate in order to get what they needed. Inordinate praise was lavished on Herod. Roman civility always gave way to humility and should one be considered like a god, the praise was to be deflected. The ego, so well fed, just couldn’t stop. Herod couldn’t deflect the praise, he had to absorb it all, making it his.

In that moment Herod was struck down. He didn’t deflect the praise, and he couldn’t give himself the opportunity to praise God. Herod, himself, had Jewish roots and certainly knew better. Historians tell us that he became so ill he had to be taken to the palace where he subsequently died, his bowels filled with worms. This was considered one of the worst deaths that one could suffer.

The main player in the story is Herod. He loved getting strokes and as a result, made very foolish decisions. He’s pretty much an example of a bad leader. As followers of Christ we have to stop and think about the places where he went wrong, and how Jesus provides a different model.

Jesus emptied himself of power and humbled himself in service to all humankind. A true leader serves in humility and recognizes that there is a higher power to which we must submit. Not only does God know more than we do, but there we lots of other people who are smarter than we are. Learn to listen to others, and give credit where credit is due.

Look at the people who surrounded Jesus. Everyone had access to him, whether rich or poor, righteous or sinner. He made people feel comfortable around him (except maybe the religious officials). No one had to pay a bribe to reach Jesus because he was into giving away power, not collecting it. The danger of collecting power is that barriers are erected which set up a system which is ripe for corruption. Eventually the leader never hears the truth, but only that which has been filtered though those using him or her to collect power.

The true leader never takes praise too seriously. I mean, who would think that their public speech was so wonderful that they must be a god! There is no mention of the content of Herod’s speech, only the people’s response. Praise is fleeting, and tomorrow there will be new issues to face. If a leader allows their ego to be fed, they will begin to believe that they are infallible, and that every decision is better than those of others. A true leader is willing to admit their mistakes and continually learn to improve.

Allowing power to be fed will ultimately result in destruction. Not only the destruction of the leader, those of the inner circle, and all whom they are supposed to be serving. Only by humbly seeking the face of Christ, and reflecting his image, can we become the servant leaders we are called to be.

Lord, may any temptations to power be swept away by the beauty of your holiness. Amen.