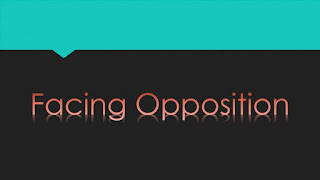 Neh. 2:9   Then I came to the governors of the province Beyond the River, and gave them the king’s letters. Now the king had sent officers of the army and cavalry with me. 10 When Sanballat the Horonite and Tobiah the Ammonite official heard this, it displeased them greatly that someone had come to seek the welfare of the people of Israel.

Nehemiah returned to Jerusalem to rebuild the walls but when he arrived, the people who were in charge were displeased. During the time of the exile, Samaritans had been allowed to provide jurisdictional leadership. Nehemiah’s arrival was a threat to their power. Both Sanballat and Tobiah were angry because of what this might mean for them because there had not been good relations between them and the first group of returning exiles. The Jews refused to be of help to the Samaritans. The history of this stung in their memories. Now, with the authority of the king behind him, Nehemiah could just might be successful in the rebuilding of the walls. If Jerusalem were to be restored, the Samaritans were afraid that this would greatly decrease their power and influence. It also meant more exiles returning and the city being filled with Jews. All of this set the stage for a massive change and so both Sanballat and Tobiah determined that they would do all that they could to oppose Nehemiah.

When Nehemiah arrived in Judah, opposition greeted him. Opposition to the rebuilding of Jerusalem had been going on for 90 years by those who settled in the area when the Jews were taken captive. In every generation there are those who hate God’s people and try to block God’s purpose. When you attempt to do God’s work, some will oppose you; some will even hope you fail. If you expect opposition, you will be prepared rather than surprised (1 John 3:13). Knowing that God is behind your task is the best incentive to move ahead in the face of opposition.

For ninety years people had been trying to block the rebuilding of Jerusalem. If we think that opposition to Christianity and putting up road-blocks is something new, then we are seriously mistaken. Nehemiah came into Jerusalem expecting the task to be difficult, but we don’t know if he anticipated semi-official opposition; those who were willing sabotage his work on a systematic basis.

As God’s children, we have been called to seek the welfare of God’s people. Nehemiah’s heart was broken by the news of Jerusalem, so much so that it was visible on his face. When our hearts and united with the Triune God, then our hearts break for the things that God sees. We look at the struggles of our friends, loved ones, and society as a whole, and our the burden for the lost becomes visible on our faces. The Holy Spirit moves us to take action!

The hard part is that when we take action, even in the power of the Holy Spirit, it’s not uncommon to face opposition. There are plenty of voices in our world who are speaking the exact opposite of what we find in the Scriptures. As followers of Christ, we must be like Nehemiah who was genuine through and through in his commitment to God, and his passion for the mission. Everything that he did was with intentionality to serve God and to get the work done. He didn’t let opposition get the better of him, but found a way to continue working.

We may become discouraged by the Sanballats and Tobiahs in our lives. Sometimes it feels as if there are those who are looking for every opportunity to make our lives difficult. At the same time we must remember who it is that has called us into the work of the kingdom. We are stewards in the Kingdom of God, and just because there are those who oppose us, we don’t back down. Instead, just like Nehemiah, we ought to put our shoulders to the work and with great energy and tenacity continue in the mission.

Lord, I pray for holy boldness for your children in the face of opposition. Amen.