Ignoring Won't Make It Go Away 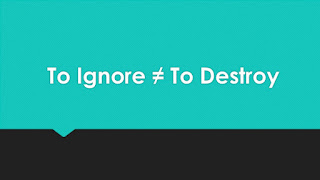 Jer. 36:32   Then Jeremiah took another scroll and gave it to the secretary Baruch son of Neriah, who wrote on it at Jeremiah’s dictation all the words of the scroll that King Jehoiakim of Judah had burned in the fire; and many similar words were added to them.

By burning the prophetic words of Jeremiah, the king thought that he had dealt with his problem. Little did he know or understand how wrong he was. In effect, by burning the scroll, the king was annihilating the peoples’ side of the covenant made with Yahweh. The fact that Jeremiah went on to rewrite the scroll reveals something about the nature of God.

Any attempt to destroy the words of God will be futile, because the words represent God’s commitment to humanity. Ignoring God, or God’s word won’t make God go away. God’s love is so intense that no matter what shameful acts we may perform, God will come back again, and again, and again. Look at what happened on Mount Sinai and the first set of tablets with the commands. They were destroyed because of the behavior of the people, but God gave them again. Look at the living Word, Jesus, whom the world tried to destroy. The incarnate Word was crucified on a cross, but rose again and through the power of the Holy Spirit the fire of the Word cannot be quenched.

No matter what King Jehoiakim did to try and ignore God, God was not to be ignored.

In reality, this negative story reveals the indescribable love of God, constantly in pursuit of humanity, refusing to give up on anyone. The reality is that this becomes a beautiful love story, where the bridegroom will not give up on his bride. And aren’t we grateful? At the same time King Jehoiakim suffered a terrible death and his people had to live with the consequences of his decisions. Not because God is wrathful, but because the king kept distancing God’s people from the loving and protective arm of God. The result was a people, left defenseless against a massive invading force, and years of exile.

Choosing to be an atheist doesn’t make God go away. I believe it was G.K. Chesterton who said something like, “if there were no God, there would be no need for atheists.” Just because we refuse to read the word of God doesn’t mean it’s not true. The timeless truths of Scripture remain, whether you or I, or anyone else in the world wants to affirm their presence. God doesn’t need our affirmation; God will simply be God.

Our hearts should be warmed by the truth that no matter what we do, whether in ignorance or outright stupidity, can separate us from the love of God. Even if we’ve made terrible mistakes, our lives do not damage the truths of the incarnate Word. Jesus’ holiness cannot be tarnished by our lack of holiness, instead a single touch from him transforms our lives and makes us clean. We can try and ignore God all we want, but it won’t make God go away. With a deep passion for his lost children, the Father will come searching for us again and again and again. We may try to destroy the messengers, but God will just keep sending more.

Jehoiakim had a chance to make things right for himself and all the people. We all have a chance. Embrace the truth and allow the love of God to love and protect you as a child of the heavenly Father.

Lord, I pray that your word would not be ignored in my life, nor in the life of the church, your bride. Amen.