What do you See?

23Some went out on the sea in ships;
they were merchants on the mighty waters.
24 They saw the works of the Lord,
his wonderful deeds in the deep.
25 For he spoke and stirred up a tempest
that lifted high the waves.
26 They mounted up to the heavens and went down to the depths;
in their peril their courage melted away.
27 They reeled and staggered like drunkards;
they were at their wits’ end.
28 Then they cried out to the Lord in their trouble,
and he brought them out of their distress.
29 He stilled the storm to a whisper;
the waves of the sea[b] were hushed.
30 They were glad when it grew calm,
and he guided them to their desired haven.
31 Let them give thanks to the Lord for his unfailing love
and his wonderful deeds for mankind.
32 Let them exalt him in the assembly of the people
and praise him in the council of the elders.


The Psalmist recognized that everyone had an opportunity to get to know God in a personal level.  No matter what the person was engaged in on a daily basis, there they could find God.  In this portion of scripture we find the merchants who traveled the world by boat.  These were wealthy individuals as they traveled around the known world of their day in search of new items which they could trade.  They were powerful men and yet they were in awe of the mighty waters.  They were humbled by the power which existed within the water -- the power to go from a beautiful peaceful calm to a tempest which made them stagger like drunks.  They knew they had no control over the waves and therefore they learned to cry out to God, for God alone could bring the storm to a whisper.  The result was that these great merchants of the sea praised God not only in their circumstances, but when they returned home and told the people what God had done.


Where does my daily walk take me and do I allow myself to see God in my circumstances?  I think that's a vitally important question.  Just last evening were took a ride out of Nampa, Idaho and toward a small town called Marsing.  At one point we came to the top of a bluff, and there over a sudden drop was a beautiful valley where the Snake River made its way through the desert.  All along the river there was lush green ribbon surrounded by barren hills covered in ancient volcanic rock.  We stood on the bluff and watched the sun go down over the Cascade mountains in the distance.  As I took in my surroundings I thought about the incredible God whom we serve.  The God who paints an incredible portrait of his beauty which surrounds us on a daily basis.  Do I appreciate what God has done?  Do I give him the credit? 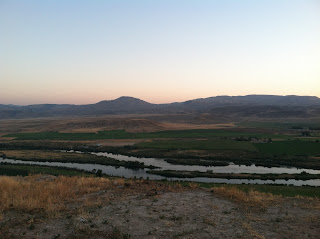 God, who created all of this beauty, loves me.  That is pretty amazing!  Not only is it amazing, it is astounding, overwhelming, unreal, etc….because the God of all of this, cares for me.  Why do we become worried about the little details of our lives?  Why are we worried about the big details of life?  God, on a daily basis, is asking us to look around us and to see him.  He is constantly revealing himself to us and is simply asking us to put our faith and in trust in him for our lives.  The God who created all that we see wants us to be in a deeply intimate and personal relationship with him.  Just as he painted the world with his beautiful colors, he will paint our lives with his creative touch.  What do you see today?


Lord, I confess that too often I take off and begin to do things without allowing myself the opportunity to step back and see your hand in all things.  Please, help me today to see you.  Amen.