The Dawning of a New Light 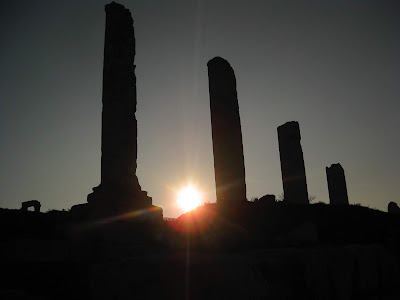 Is. 19:18   On that day there will be five cities in the land of Egypt that speak the language of Canaan and swear allegiance to the LORD of hosts. One of these will be called the City of the Sun.

Isaiah’s words were prophetic. A time would come when the people of Egypt would become followers of God. The good news would spread to the Gentiles and the transformation would be dramatic. This would be demonstrated by the work that God would do in the City of Sun. Some translations refer to this place as the “City of Destruction.” It represents a stronghold of heathenism, a place where the sun is worshipped and sin runs rampant. The dawning of a new light will result in the replacement of the sun, with the Son of God. The power of the Gospel will be enough to reform the most vile of cities into a place of God’s holiness. This is the promise of the advent of the Messiah.

Far too often we fail to see the magnitude of the hope that is offered through the advent of Christ. Sadly, too many of us are living a powerless Christianity in which we put our trust in ourselves and our own works, rather than the miraculous in-breaking of God into our lives. The promise of advent is something supernatural. In our own day we can hardly imagine the most vile of places becoming holy ground, and yet, that is what happens when The Light begins to dawn.

Jesus brings with him the light of holiness and as it touches that which has been unclean, it entirely transforms. The dawning of the new light means that those who have been entrenched in the futility of life can be set free. The light can transform our marriages, sex lives, finances, relationships, work, and even more. This is a powerful message that the City of Sun will be turned into holy ground. In today’s context it would be that Sin City, known as Las Vegas, can become God’s holy ground, and if that is true, then the ground of our own lives can be radically saved.

Advent is a reminder of the power of the true Light to break into this dark world. God’s supernatural power, brought to bear through the work of the Holy Spirit, carries the light of Christ into the darkest corners of this world, and there we find hope.

Lord, may I live in your light, trusting in your mighty and powerful intervention. Amen.