Do You Know What’s Going On? 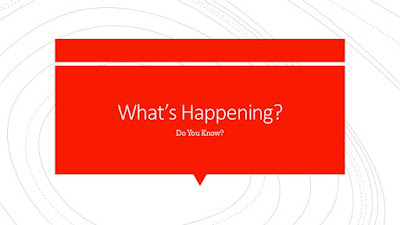 1 Kings 1:11 Then Nathan asked Bathsheba, Solomon’s mother, “Have you not heard that Adonijah, the son of Haggith, has become king, and our lord David knows nothing about it?

It seems that several times in life David was not aware of what was happening around him. Maybe he chose to live in ignorance to the activities of his sons because he hated to confront them, or he may have allowed himself to become completely out of touch with what was happening in his kingdom. Whatever the reason, it created huge problems when David became disengaged and allowed his emotions to guide his response.

We all have a sphere of influence, an area where we are responsible, whether it’s in the home, at work, or even in the church. Sometimes we want to use ignorance as our defense when we are confronted with a problem. Sadly, if we choose to be intentionally ignorant, there will be consequences.

Maybe there are tensions between you and your spouse. If you ignore the red flags and choose to simply not believe that there is anything wrong, then you may become surprised by the outcome. David seemed shocked that his son Adonijah was making himself king and there were terrible consequences. Had he spoken directly and announced his intentions, he may not have found himself in this kind of a situation, having to make an enemy of another son. By not paying attention to what was going on he created an environment where there would be extensive damage. By not paying attention to our marriage relationships, we may wake up one day to discover that there has been much damage, and it may not be reparable.

There are signs in our world regarding the state of Christianity, and we need to pay attention. In many ways it feels as if the credibility of Christianity is under attack because of the decay we are finding within. The world stands by and says, “see, I told you it wasn’t for real!” When we have priests who use their role to take advantage of those within their care, we should be appalled. We should know what’s going on, and pray and take action to support the victims and create protective measures for the future. We can’t just point our fingers and say, “It’s just the Catholics!”

Are we paying attention to the abuses of power that have occurred in large churches without a strong accountability structure? Whether we are Christians or not, we should pause when reading the phrase of Lord Acton:

“Power tends to corrupt and absolute power corrupts absolutely. Great men are almost always bad men, even when they exercise influence and not authority: still more when you superadd the tendency or the certainty of corruption by authority.”

The temptation for those who are in authority without accountability is toward corruption. Do you know what’s going on? We must pay attention to this, even in the church, for the very bride of Christ can be corrupted.

I have people ask me on a regular basis about the value of a denomination in this age of post-denominationalism. A denomination will never get everything right, but there is a structure with checks and balances. Maybe we ought to check out what’s going on when a pastor doesn’t want to be a part of that kind of structure? Or, when any pastor doesn’t want to be accountable to the checks and balances that may be established. But this goes far beyond a pastor and reaches to all of those who claim to be followers of Jesus Christ. There must be systems of accountability established and a willingness to humbly submit to those whom we have asked to keep us accountable. Sometimes there are some tough questions that must be asked.

We must be aware of the state of Christianity and not simply ignore what is going on! God is still at work and continues to use the church, the bride, to usher in the kingdom of God. At the same time, we need to help to correct anything that may get in the way of our ability to genuinely reflect Christ in this world.

Financial accountability is another area of concern because of temptation. When one is faced with financial stress, if there are no controls, it’s easy to convince yourself that you’re simply borrowing from the organization and will return the funds. Usually these funds are never returned and financial fraud becomes a huge issue in the church and in the workplace. Pay attention to what is happening and set-up appropriate controls so that you know what is going on.

Serving in the workplace should be done with excellence. Followers of Jesus Christ should set the standard for accountability and outstanding work practices. If a Christian finds themselves in a position of leadership, they should invest in knowing what’s going on! When there is smoke, take the time to sniff it out and find if there is a fire (because usually there is!). Take action immediately when you know that action should be taken. Be curious and ask questions, even when you may not be appreciated for this behavior.

David’s unwillingness to pay attention to what was happening in his kingdom had dire consequences. Eventually some of his faithful assistants who had been attentive were able to bring him the necessary information and encourage him to act. Whether it’s in the earthly or spiritual realm, God’s children need to pay attention to what is going on. It’s only in this way that we can become partners in God’s transformational work in this world.

Lord, please help me to be attentive to what you reveal to me. Amen.