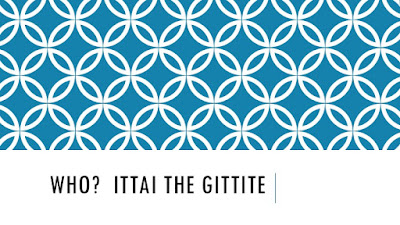 2Sam. 15:19   Then the king said to Ittai the Gittite, “Why are you also coming with us? Go back, and stay with the king; for you are a foreigner, and also an exile from your home. 20 You came only yesterday, and shall I today make you wander about with us, while I go wherever I can? Go back, and take your kinsfolk with you; and may the LORD show steadfast love and faithfulness to you.” 21 But Ittai answered the king, “As the LORD lives, and as my lord the king lives, wherever my lord the king may be, whether for death or for life, there also your servant will be.” 22 David said to Ittai, “Go then, march on.” So Ittai the Gittite marched on, with all his men and all the little ones who were with him. 23 The whole country wept aloud as all the people passed by; the king crossed the Wadi Kidron, and all the people moved on toward the wilderness.

Here we read about a man named Ittai, the Gittite. He was a Philistine who was faithfully serving the king. Now, as the king and his leaders were fleeing from Absalom, this man could have taken the opportunity to go home and live in relative safety. He didn’t need to go and support David and yet, sacrificing everything, he remained loyal to David and did all the he could for him.

Ittai couldn’t leave his family back in Jerusalem and so he had to take his entire household with him. They marched out together with the other leaders and king David, leaving their adopted home behind. We know that Ittai faithfully served David and eventually was one of this top three commanders. He was loyal to the king, serving self-sacrificially in honor and respect of the LORD.

Ittai stands in direct contrast to Absalom. Everything that Absalom did was out of self-centered greed and he was willing to let many suffer for his personal goals and ambitions. Ittai did everything out of loyalty and self-sacrifice, responding with a heart filled with respect for God and the king for whom he is willing to die.

In Ittai we see a foreshadowing of Jesus Christ. Coming as a foreigner to this world, Jesus willingly gives of himself for the sake of humanity. He could have lived in safety — at home with his Father, but he chose to be self-sacrificial. He was loyal to his Father, and to all of humanity, creating the possibility that we might all be children of God.

Ittai, just like Christ, becomes a role-model for all of us. We are called to imitate Christ in this world. Throughout the Old Testament we see individuals and situations that serve as guide-posts, pointing the way to Christ. It’s almost as if the kingdom of God breaks into the kingdom of this world from time to time, giving us a glimpse of what is to come.

When we participate with Christ and his mission in this world, we partake in God’s work of revealing the kingdom in the here and now. These actions that reflect Jesus point us, and those around us in the direction of God. It’s this breaking in of the kingdom, that moment where we experience heaven on earth, that is a foreshadowing of all that is to come. We are invited to become partakers of the divine nature, through loyalty and self-sacrifice, ushering in the kingdom of God.

Lord, thank you for the sacrificial lives of those who have gone before. May they serve as a model for my life. Please, help me to follow you into this world. Amen.